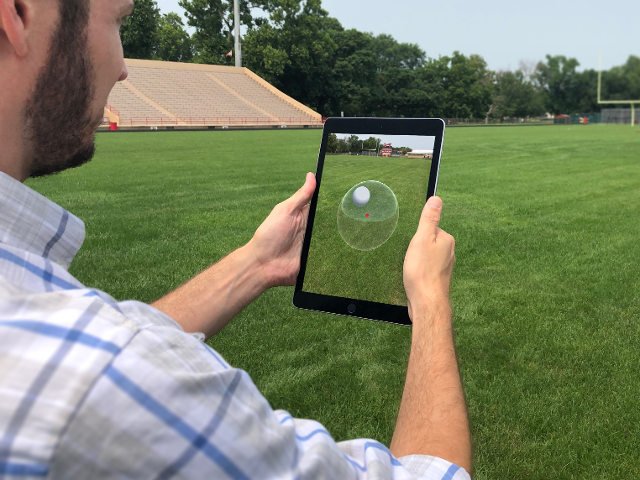 PEORIA – All too many times, high school, college or even pro athletes push to be able to stay in play after a hard hit during a game, or they push to get back on the field after they’ve been held out due to a concussion.While sideline testing is done, it has limitations.

The so-called FlightPath application being developed by researchers at the Jump Simulation and Education Center’s Children’s Innovation Lab is a game that takes only two minutes to complete, so it can be used on the playground or the sidelines to easily confirm a suspected traumatic brain injury. Adam Cross, MD, FAAP is a pediatric hospitalist and clinical informaticist who directs the lab. Dr. Cross, says unlike typical exams, his app does not rely on someone being truthful about their symptoms, such as an athlete who downplays their symptoms to stay on the field.

“Because they want to keep playing – we term that ‘sandbagging.’ And the current tests that we have really don’t protect against sandbagging. They’re so reliant on people being honest with their symptoms that if somebody doesn’t want to tell you, there’s not a whole lot you can do. But this application that we’re using is meant to test all of the different ways in which a concussion can manifest, and there are many.”

Eventually the app could be downloaded for an Apple or Android device and will measure the physical, perceptual, and visual impairments caused by a brain injury. The game asks the user to capture a virtual hummingbird within the user’s actual environment – which is how the “mixed reality” is created.

Dr. Cross explains,“We have a set of complex algorithms that determine how the bird should fly in that space to better test your abilities. If it detects you’re having trouble in a certain way, it actually will go back and test that kind of movement to get a good sense of what’s going on with that particular impairment.”

The mixed reality system also requires the individual to move around physically to follow the hummingbird which tests the user’s coordination and balance.

“That actually requires you to not only move your hands and arms up and down but also reqires moving throughout the room (or location). You have to walk, you have to turn, you have to look up and down and all that requires vision; it requires reaction time to move with the hummingbird. It requires balance and it also requires a little bit of memory as you watch the bird leave the screen and figure out where it was going if it goes very quickly. It adapts itself to your performance in order to best test that threshold where you start having trouble.”

The game app creates thousands of data points every minute which are analyzed using machine learning techniques. Those results can speed up time to diagnosis which improves treatment and recovery. It also helps a person’s care team understand how impairments are improving over time. While current tests can be memorized after a few sessions, the FlightPath app has randomized but constrained paths that are never identical, which prevents the user from simply memorizing the hummingbird’s flight pattern.

Dr. Cross has applied for additional federal grants, to supplement grant funding through the Jump ARCHES program, speed up development and testing, which will include offering free downloads and small incentives for individuals with no symptoms of a concussion to play the game. That data will provide a necessary performance baseline for comparison against other users with known manifestations of concussion.

While the app could be ready for pilot testing within six months, Dr. Cross says it could take a few years for the federal Food and Drug Administration to approve for clinical use.

“Heart – Crazy On You” now playing on The Eagle, the Riverbend’s only Classic Rock station. Check out Riverbender Radio Today and Listen to Win!

ORLANDO, Fla. – A new hotel in Orlando is offering the latest in cutting-edge technology, making it a leader in the wellness, technology and hospitality industries.The Lake Nona Wave Hotel opened in December 2021.Jessi Blakley, the vice president of Lake Nona, said it is the centerpiece of the community.Ad“It’s been...

AMD lifted the curtain on the Ryzen 7 5800X3D in January, making the bold claim that it was the “world’s fastest gaming processor.” It’s a big statement for a chip that, under the hood, is the same as the Ryzen 7 5800X — a processor that launched a year and...

Tencent Holdings Ltd said it will shut down a service that allowed Chinese gamers to access overseas platforms to play unapproved foreign games, in a sign of tightening compliance as Chinese regulators more closely scrutinize the industry. The country’s largest social and gaming firm said late on Wednesday it will...

LOS ANGELES (KCAL/KCBS) - A family counts itself fortunate. They still don’t know where a bullet that struck an 18-year-old came from, but they now realize how close they came to tragedy.A gaming headset is credited with saving the life of Jonathan Gonzalez.“You can see the damage. It actually bent...